About Seeds of South Sudan

Seeds of South Sudan was founded in Colorado in 2011. It is a faith-based organization dedicated to educating and nurturing South Sudanese orphans to be seeds of change in their country.

Seeds founder Arok Garang and volunteers interview children at Kakuma Refugee Camp who are recommended by community leaders. They must be:

Students start formal education at Roots Academy (K-8).  Others attend high schools and university in Kenya. As our Seeds scholars graduate high school, we are committed to providing post-high school education so they can rebuild South Sudan.

Seeds is designated as a US 501(c)(3) tax-exempt organization, so your donations are fully tax deductible. 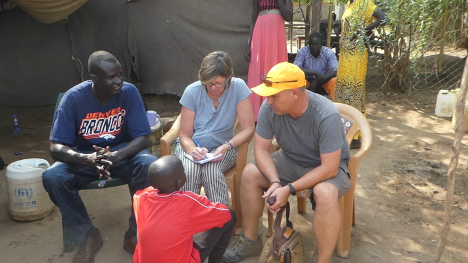 A Brief History of South Sudan

The founding of the country of South Sudan dates from January 2011 when the people of South Sudan voted on whether they should break away from Sudan and declare independence. On January 30, 2011 the results had shown that 98.83% of the population had voted for independence from Sudan.

Certain disputes still remain with Sudan, such as sharing the oil revenues. An estimated 80% of the oil in both Sudans is from South Sudan, which would represent an amazing economic potential for one of the world’s most deprived areas. The region of Abyei still remains disputed and a separate referendum is due to be held in Abyei on whether they want to join North or South Sudan.

Independence has not brought peace to South Sudan. Civil war continues, involving at least seven armed groups. According to UN figures, the various conflicts affected nine of South Sudan’s ten states, with tens of thousands displaced. The fighters accuse the government of plotting to stay in power indefinitely, not fairly representing and supporting all tribal groups and neglecting development in rural areas.

The United Nations has peacekeepers in the country. In January 2014 the first ceasefire agreement was reached. Fighting still continued and would be followed by several more ceasefire agreements, none of which have ended the fighting.

There were ethnic undertones between the Dinka and Nuer tribes in the fighting. The conflict has killed up to 300,000 civilians. It is estimated that 3 million people have been displaced in a country of 12 million, with about 2 million internally displaced and about 1 million having fled to neighboring countries, especially Kenya, Sudan, and Uganda.

HELP US BUILD A GENERATION OF EDUCATED LEADERS

Join us in transforming the lives of South Sudanese refugee orphans who are eager to attend school!

You have Successfully Subscribed!

We will never sell or spam your email.